Our goal is to educate, but please be advised if you are sensitive to viewing and/or reading medically graphic material.

A client has generously agreed to share his and his dog’s story. We are so thankful for the services of working dogs and the unique talents they possess. Ken’s story is below.

Dryden began her career as an explosive detection canine at a very young age. She entered the puppies behind bars program in December of 2010. This program trains canines in emotional support and explosive detection. The canines are paired with a suitable inmate and taught socialization skills with people and other canines. She also began her training in finding explosives. Upon completing the training program, she entered the training facility for MSA Security. Dryden was trained to find commercial and military grade explosives. She was also trained to find “homemade” bombs.

Dryden entered the work field in December of 2012. During our time working together, we supervised all sports venues in New York and Philadelphia as well as events at Madison Square Gardens. Dryden has worked several important venues. She has worked in the NFL for 3 seasons. She has attended two Super Bowls, SB 50 and 51, eight playoff games, as well as 55 regular season games. We also supervised the 2018 Grammy awards in NYC.  In September of 2015, Dryden was a guest on a day time talk show, The Security Brief, where she performed a demonstration of her detection skills. She has also been on ESPN on two different occasions.

Since her retirement in October of 2018, Dryden has been visiting retirement communities giving emotional comfort to the residents. 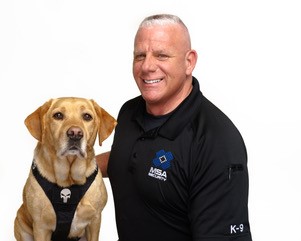 A veterinarian here at Cummings Veterinary Hospital recently scheduled and performed ovariohysterectomies on two intact, unrelated, female dogs of the same breed. The procedure, commonly known as a “spay”, removes a female dog’s two ovaries, the uterine horns and the uterus. This organ structure looks similar to a Y-shape, with a thicker trunk, and the normal size is dependent upon breed and age. Performing an ovariohysterectomy (OVH) ensures the female dog will not experience heat cycles or become pregnant, and will be less likely to develop reproductive disease. The OVH eliminates the possibility of future uterine and ovarian cancers, and when done before the fourth estrus (heat) cycle, greatly reduces the incidence of mammary cancer. Most veterinarians recommend this procedure be done between 6 to 14 months of age, depending on the size of the dog, to reduce the risk of future reproductive issues balanced with maintaining the needed hormones for young animal growth.

In our first case, one dog was spayed at 7 months of age. The picture below, taken after removal, illustrates the relatively small size and distinct structure of a healthy uterine system. The procedure took approximately 45 minutes to complete, from pre-anesthetic preparation to incision closure. The dog was sent home with their owner that evening and is recovering well. She returned approximately 2 weeks later for suture removal. 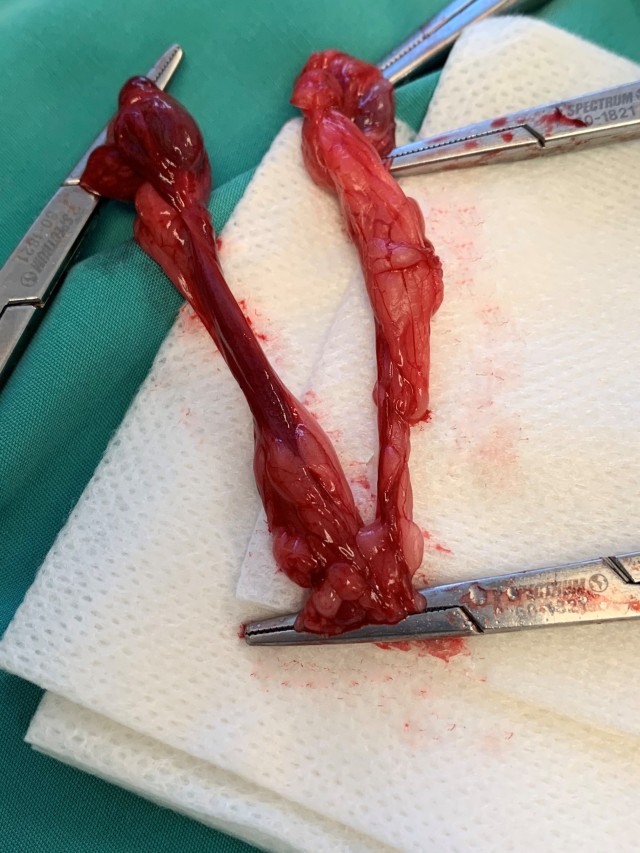 In the second case, a 9-year old, intact, female dog was scheduled for an appointment for discharge from her vulva. She had been seen at the emergency room for not eating and not feeling herself, where surgery was recommended, and she was started on antibiotics. She was rechecked here, and examination and lab results revealed a very high white blood cell count, indicating infection despite antibiotics. The owner made the decision, after consultation with the veterinarian, to spay her dog. The picture below, prior to removal, shows the still infected ovaries, uterus and horns, a condition known as “pyometra”. For those interested in etymology, “pyo” and “metra” come from the Greek language, indicating both pus and womb. It is a descriptive name for a dangerous condition. 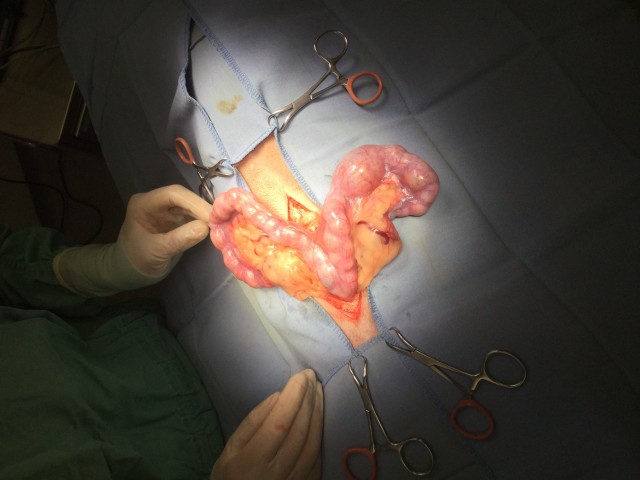 The size of the organs are larger than in our first picture, that of a similarly sized, same-breed, female. Though some of the size difference is due to age and multiple heat cycles, the irregular and swollen appearance is due to the presence of infectious material and the body’s reaction to infection, as the immune system sent a response to the problem area. The main content within the distended organ is pus, a thick fluid containing white blood cells, bacteria and tissue. This dog’s symptoms were indicative of a bacterial infection, although, as is often the case, symptoms were not obvious until the infection was quite serious. For this older female dog, the operation was a success. She handled the operation well, from pre-operative preparation, anesthesia, surgery, and through post-operative recovery. She received further antibiotics and pain medications for follow-up care. She is expected to fully recover.

Pyometra (uterine infection) can occur in dogs after repeated heat cycles as the uterine lining becomes progressively thickened, and bacteria from the outside of the body can ascend inside and grow rapidly. As female dogs’ anatomy is quite close together and openings are generally unprotected, it is not uncommon for bacteria to end up in places it doesn’t belong. Owners of unspayed (intact female dogs) should be on the lookout for symptoms like: vulvar discharge, lethargy, increased drinking and urination, inappetence, and vomiting. As you can see, some symptoms do not seem necessarily related to reproductive problems. It may be very difficult for an owner to narrow down cause and effect. Sometimes, pyometra can be “closed” meaning there is not any discharge present, and this type of infection is even more dangerous as the uterus can rupture. Even if the infection is properly identified, it can be quite dangerous, and even life-threatening. This is one of the reasons why an ovariohysterectomy is a highly recommended procedure for non-breeding dogs.

We are happy to share that, three weeks later, both dogs are doing well. Not only are we pleased to see a potential catastrophic event averted in an older dog, but we also know the young female is best prepared to live a long and healthy life. As always, we are happy to share knowledge with our friends and clients, and welcome discussion as to the best health choices for your pet.

Your veterinarian has recommended an ultrasound for your pet. And, now, you have questions. Is it just an extra cost? Will it be painful? Aren’t those just for people? No, no, and no! Let us walk through the basics of ultrasound and the potential value to your pet’s care and well-being. An informed decision is the best decision! Many people will recognize an ultrasound picture as the one a pregnant mother gets of her growing fetus. It’s hard for the average person to decipher all the information present in that greyish, grainy, picture, but to a trained medical professional, it is a goldmine.

An ultrasound is made from pulses of sound that travel into parts of the body. These pulses travel to and through the boundaries inside your body, like those of soft tissue, bone or fluid, and bounce back to the ultrasound probe. The probe measures the distance of the sounds between boundary and probe, and using that information, the ultrasound machine builds a picture of what’s inside the body. Because the probe can be maneuvered on the body by the sonographer and sends millions and millions of sound pulses, it is possible to get a very comprehensive picture below the skin’s surface. Also, a type of ultrasound known as Doppler ultrasound can measure frequency changes as the sound waves reach moving objects, such as blood. This enables the doctor to determine rates of blood flow, fluid distribution and other internal rhythms.

Doctors use ultrasound for a variety of reasons, to include some very important ones: ultrasound does not expose the patient to radiation, it can be performed and assessed more quickly than other techniques, and doctors can look at internal organs and functions without anesthesia and surgery. From a practical perspective, an ultrasound is likely to be a smaller financial cost for the client than many other techniques.

Your veterinarian may recommend an ultrasound to help them properly and efficiently diagnose internal problems like organ disease, trauma and damage, heart and vascular issues, and more. It is an advanced tool that truly advances pet care and can enhance and even save lives. If your pet has been recommended for an ultrasound, or you simply want to learn more, the Cummings Veterinary Hospital team is happily available to answer questions.

Do you feel like your dog “gets you”? Like the old country song, does your pup say it best, when they say nothing at all?  It’s not your imagination, or wishful thinking…there’s science in there!

As dogs have spent thousands of years adapting to, and promoting, human interaction, both their behavior and their physical characteristics have evolved to the beloved pet we have today.  Dogs have become, well, cuter. It’s true! Just like how we are drawn to big-eyed babies with chubby cheeks (and tend to tolerate lots of crying and sleepless nights as a result), we are pulled to dogs in the same way. Dogs are the softer version of wolves.  Hence, those sweet faces and puppy dog eyes!

Dog evolution has changed your pet’s facial structure and movement to better respond and communicate with you. Take eyebrows…you may not think much of yours; you may pluck them, shave them, or just consider them window dressing, but they serve a purpose. Eyebrows helped humans communicate with one another through time, saying, “I’m friendly”, or, “I’m angry”, or maybe, “come hither”. It’s one of the ways the human race has survived over time, and thrived, as we found methods to make our intentions known.

Humans have selected dogs over time that possess that means of human communicative skill and child-like similarity. Whether we really understand what a dog eyebrow raise really means, we think we do, and we are drawn to it. When dogs move their brows and show those big eyes, we feel like they are interested in us, want to be with us and need us. When they give that expression that says, “Don’t leave!” it breaks our hearts. Those are powerful pulls, aren’t they?

Dogs who use these almost human expressions actually get adopted faster from shelters. It’s an evolutionary adaptation that’s definitely working. We want to take care of our dogs and keep them happy, healthy, and loving us. It just goes to show how much we, as humans, have connected with dogs and think of them as part of our human family.

We wanted to introduce our new Cummings Veterinary Hospital Stories blog. So, hello, friend, glad to see you here! Our intent, and it’s evolving daily, is to provide you with professional medical insights, personal stories (the ones that make you laugh and cry), interesting cases, musings of veterinary professionals, and more. We think it will be informative and fun. This is NOT a forum for medical advice, save that for your wonderful interactions with the staff at Cummings’, but we do hope to bring something new to your day. If you have ideas, questions, or comments, let us know! See you soon!